The Buccini/Pollin Group (BPG), Chef Tyler Akin, Mayor Mike Purzycki, and Wilmington’s independent restaurants joined the Independent Restaurant Coalition (IRC) on the IRC x Wilmington series, a collection of mission-driven dinners and experiences to benefit neighborhood restaurants and bars across the country. The series ran from December 2021 through March 2022, featuring world-renowned chef talent for one-of-a-kind, collaborative dining experiences between visiting and local chefs. The series ultimately raised $100,000 to benefit the Independent Restaurant Coalition’s mission of supporting independent restaurants nationwide. The funds were presented to the IRC’s Executive Director Erika Polmar on Friday, July 15, 2022, via a press conference with all parties.

“Seeing this series come together was something of a dream come true,”  said Tyler Akin. “As a board member of the IRC, I’m intimately aware of what $100,000 can do and for that, I am so grateful to the participating chefs who generously shared their time and talent with us; to our sponsors who supported the series; to BPG for believing in this series when it was just an idea; and to all the guests that took time out of their busy lives to dine with us in the name of supporting a larger mission.”

Throughout the series, a large focus for the IRC was getting the Restaurant Revitalization Fund (RRF) replenished, a program created with bipartisan support from 90 Senators. The Senate ultimately failed to pass funding to replenish the RRF in May, leaving nearly 200,000 restaurants without the financial assistance they desperately need. The IRC continues to explore every possible avenue to give neighborhood restaurants and bars impacted by COVID-19 the relief they need to keep their doors open and keep their teams working – including grants, government relief programs, policy change, business, and mental health support

“Independent restaurateurs deserve a voice that’s heard, collaborators who care, a roadmap to resources, and the potential for profit,” says Polmar. “Entirely through the generosity of donors and partners, we’ve been able to build a nationwide coalition of members and activated a monumental grassroots advocacy effort that led to the creation of the Restaurant Revitalization ​Fund. But, there is much more to do. The generosity of the Buccini/Pollin Group (BPG), Chef Tyler Akin, Mayor Mike Purzycki, and Wilmington’s independent restaurants will make a ​tremendous impact on our ability to do this important work.”

The Buccini/Pollin Group has played an integral role in the revitalization of Downtown Wilmington, investing a growing $1.6 billion in an array of independent restaurants, music venues, and more. The result is a dining scene that’s growing to rival those of Philadelphia, NYC and Washington DC. Together with Akin and the group’s philanthropic arm, BPG Cares, the IRC x Wilmington was brought to light over a shared interest in seeing independent restaurants succeed.

“My partners and I are so honored to be involved with the IRC x Wilmington project, which shed a light on the need to support restaurants nationally, in addition to locally,” said Rob Buccini, Co-Founder and Co-President of BPG. “We’ve worked for many years to create a boutique, destination-worthy dining scene in our backyard and this project, along with our suite of stellar local restaurants, has brought incredible attention to the area and the need to keep restaurants afloat nationwide.” 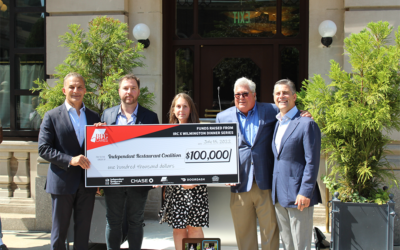