Workers and excavators reached bottom after removing 48 thousand cubic yards of dirt from the site and digging five stories down. Co-President of BPG Rob Buccini said the company has made massive progress since beginning construction.

“We’ve eliminated the majority of the risk in the project. Obviously when you go down 70 feet there’s unforeseen conditions. We’ve been blessed so far not to have encountered more than we expected and with us hitting rock bottom, as we like to say, we’ll be able to start pouring foundations in the next two weeks,” said Buccini. “You’ll actually see a structure that will eventually become the 500 space parking garage and the 200 unit luxury apartment project.” 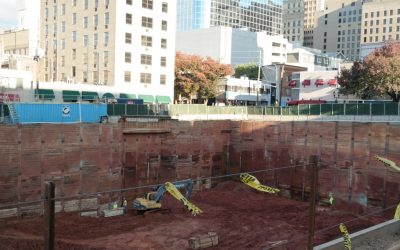