By Anna Merriman for Curbed Philadelphia

After a long, and occasionally unclear, history, the site at the corner of Elfreth’s Alley and Second Street has finally been reborn.

A ribbon cutting is being held Thursday afternoon for a new six-story development, dubbed The National, which is officially opening its doors at the property in the heart of Old City. The site was once home to the historically designated National Products Building.

The new space brings 192 apartments; 4,000 square feet of retail space; a two-level underground parking garage with space for 60 cars; and amenities for residents. Those include a roof deck, pet spa, and two-story clubhouse. The apartments themselves range from studios to two-bed places, and they’ll feature kitchens with quartz counter tops, washer and dryer in unit, and full length windows with views of Old City and the Ben Franklin Bridge.

Check out photos of the new space below: 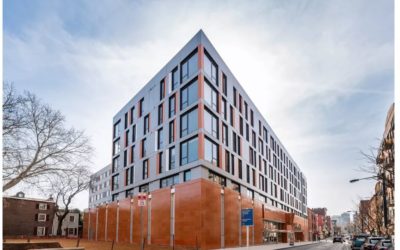