The Buccini/Pollin Group is Proud to be the Presenting Sponsor of the play #BlackJobsMatter: A Wilmington Experiment

The Buccini/Pollin Group is proud to be the presenting sponsor of the play #BlackJobsMatter: A Wilmington Experiment on July 13th at World Cafe Live at the Queen.

The play debuted for one night only in February and has received overwhelming  reviews and response. The Buccini/Pollin Group is excited to be able to sponsor this evening and provide the opportunity for more individuals to experience this outstanding performance. The event is complimentary, however registration is required as space is limited. Click here to register.

Bob proceeded to partner with Greg Morris, an African American playwright living in Wilmington, Morris than wrote the play, #BlackJobsMatter.

Morris’s own story is unique in that he grew up on the tough streets of LA, took part in illicit behavior himself only to later get himself out and move to the East Coast where he then attended Temple University earning his degree in Fine Arts. He is now not only a playwright but also an adjunct professor at both  The University of Delaware and Wilmington University. Morris is living proof of what happens when you get a chance and how having a chance allows for positive life choices and change.

The Buccini/Pollin Group is thrilled to be able to support such an incredible cause that has the potential to shift the community in a positive direction. 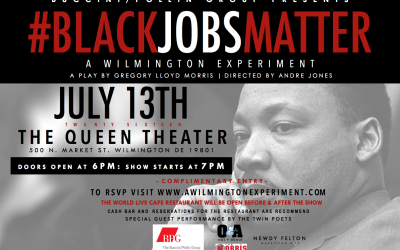