When Jason Aviles moved into artist live/work space Shipley Lofts, he soon learned one of the downtown area’s major drawbacks: buying fresh groceries isn’t easy if you don’t have a car.

“The idea was to create a solution to food access,” Aviles said, an hour before the soft launch of Wilmington Green Box, as the sound of music from the Ladybug Festival fills the air.

“Literally, I had to carpool whenever I could to go food shopping,” he says. Not an ideal situation for the approximately 4,000 people living in the 10-block radius of downtown, nor for the boom in downtown living spaces that draws new residents who want to work and live in the city.

“We didn’t have funds, we didn’t have money, but we had a vision,” Aviles said. “We found an old freezer out of a 1940s Victorian home, and we turned it into a mobile cart. It was a huge success.”

With the support of Downtown Visions and the Buccini/Pollin Group, the nonprofit — now expanded to include Creative Director James Thompson, Youth Supervisor Emmanuel Knotts and Event Coordinator Jasmine Brown — has a home on Market street, just above 4th Street. 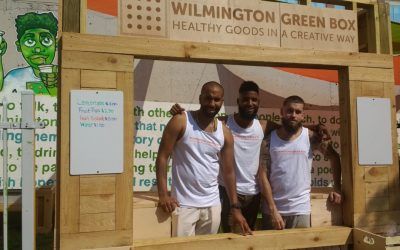