Flanked by public officials including Governor Jack Markell, Wilmington-based developer, The Buccini/Pollin Group, Inc. (BPG) broke ground this morning on Wilmington’s latest multi-family project: The Residences at Mid-Town Park. Located at 820 N. Orange Street, the former site of the Mid-Town Parking Garage. The development includes 200 apartments in 2 buildings, 12,000sf of retail space and a 511 space parking garage. The total cost of the project is estimated to be $75 million.

The project is significant for several reasons. This marks a major move westerly in the Central Business District of the redevelopment that has taken place over the last several years, largely on Market Street. It also restores much needed public parking to the downtown which has been lacking since the former Mid-Town Parking Garage was condemned.

Joe Van Horn, Operating Partner of Chelsea Tavern, is delighted to see the construction begin. “We are looking forward to serving our new neighbors on a daily basis, and anticipate that the added public parking will drive new business in a positive direction.”

The project will include a private street which separates the 2 apartment buildings. The street will be named Burton Place in honor of former Wilmington City Councilman and Civil Rights Leader, Dutch Burton. It was due to his sit-in at the Eagle Coffee Shop (which was located in the former Mid-Town parking structure) in 1958 that eventually Delaware’s Accommodation Law was overturned.

The Residences at Mid-Town Park will feature cutting edge amenities the Delaware market has not yet seen including a demonstration kitchen and a dog washing station. A courtyard is elevated off Shipley Street that includes an outdoor swimming pool and barbecue area. The Residences at Mid-town Park will also offer residents a fitness center and screening room. The community will include studios, one and two bedroom apartments with stainless-steel appliances, quartz counter tops and high-end finish details throughout.

“We are thrilled to finally be underway in this transformative project for Wilmington and it’s Downtown. A project of this complexity could not be accomplished without extraordinary partners including HUD, the State of Delaware, the City of Wilmington, the Wilmington Parking Authority, NCALL, WSFS, and Barclays. We are truly grateful for all those who made today possible,” explained Robert Buccini, Co-President of The Buccini/Pollin Group.

The parking garage is expected to be completed in winter 2017 with the apartments following in summer 2018. 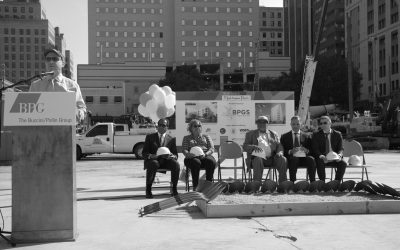