The Buccini/Pollin Group Appears in Out & About Magazine

Market Street has seen its share of hard times.

The back­bone of Wilmington’s com­mer­cial and retail life for more than two cen­turies, the street fell into decline in the late 1960s, rav­aged by rioting and a National Guard occu­pa­tion in the wake of the assas­si­na­tion of the Rev. Dr. Martin Luther King, Jr. in 1968. The con­tinued growth of sub­urban shop­ping malls evis­cer­ated its retail core. Market Street’s trans­for­ma­tion into a pedes­trian mall in the mid-1970s brought a glimmer of hope, but it was short-lived.

Why would a big-name national retailer want to invest mil­lions down­town when the local mer­chants, who pre­sum­ably knew better, had decided to close up shop at 5 p.m.—when DuPont employees went home—shuttering their store­fronts with for­bid­ding iron gates?

While the pas­sage of the land­mark Financial Center Development Act in 1981 would engulf Delaware’s shores with a tidal wave of credit card banks, it meant little to Market Street. The bankers, like almost everyone else in the ‘80s, pre­ferred the suburbs.

Click here to read the full article from Out & About Magazine. 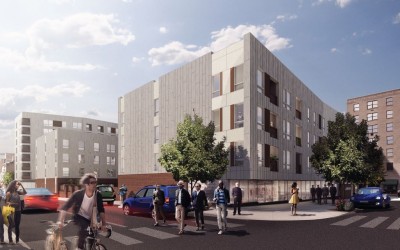