Officials of The Buccini/Pollin Group, a privately-held, full-service real estate acquisition and development company (BPG), today announced that it has completed the acquisition of the 353-room Sheraton Raleigh Hotel in North Carolina. The hotel will be operated by PM Hospitality Strategies, Inc. (PMHS), a leading, national hotel management company. This brings PMHS’ third-party management portfolio to more than 35 hotels, including seven new assignments in 2015, with multiple projects in the pipeline expected to close within the next 18 months.

“BPG continues to execute its strategic plan of acquiring full-service, stabilized hotels in primary and secondary markets and selectively developing new hotels in high barrier-to-entry urban locations. 2015 is one of the strongest years the hotel industry has ever experienced, and all signs point towards continued prosperity”

“BPG continues to execute its strategic plan of acquiring full-service, stabilized hotels in primary and secondary markets and selectively developing new hotels in high barrier-to-entry urban locations. 2015 is one of the strongest years the hotel industry has ever experienced, and all signs point towards continued prosperity,” said Dave Pollin, co-founder. “As the lodging cycle progresses through the middle innings, BPG is positioned to continue our aggressive, national acquisition program. We are proud to bring the 20th Hilton affiliated hotel into our portfolio as we seek out markets that feature a large creative class, dynamic and diversified demand generators, and vibrant urban settings.”

Joseph Bojanowski, president of PMHS, noted, “We have doubled our management portfolio over the past two years, adding properties in six states. Our goal is to continue growing our platform, essentially doubling in size again over the next three years. With the industry operating at very positive levels, savvy owners are engaging proven management companies to optimize profitability and customer satisfaction while controlling margins. PMHS has demonstrated its expertise in these areas and plans to aggressively market its capabilities and successes as it pursues its growth goals.”

Located at 421 South Salisbury Street, the Sheraton Raleigh is less than one block from the Raleigh Convention Center and steps away from the state capitol, museums, restaurants, nightlife, the Duke Energy Performing Arts Center and Red Hat Amphitheater. The hotel features include Jimmy V’s Osteria + Bar, which has quickly become one of Raleigh’s most popular gathering spots. PMHS will oversee a multi-million dollar property improvement plan that includes a top-to-bottom renovation of guestrooms, corridors, fitness center and club lounge. The Sheraton Raleigh will be one of the first hotels to incorporate Starwood’s new vision for its largest brand, the Sheraton 2020 plan. The hotel’s more than 18,000 square feet of meeting space was voted a 2014 Top New and Renovated Meeting Space award winner by Convention South Magazine.

“The Sheraton Raleigh Hotel marks our 21st hotel east of the Mississippi River, allowing for strong economies of scale and providing us with invaluable market knowledge that we will use to immediately improve the property’s bottom line,” Bojanowski added. “Raleigh remains one of the fastest growing cities in the United States, with a strong economy and multiple demand generators. In addition, Raleigh’s downtown core is booming with new office buildings, restaurants and other amenities, mimicking the national trend of companies and residents returning to the urban heart of their communities. We continue to target markets like Raleigh that are growing dynamically and have high barriers to new competition.”

BPG remains one of the most active hotel developers and owners in the country. In addition to the Sheraton Raleigh, BPG will deliver the 168-key Hampton Inn & Suites Washington DC / Navy Yard in September 2015, the 310-key Embassy Suites New York Midtown in 2016 and has commenced development of Canopy by Hilton hotels in Portland, Oregon and Metro Washington D.C.

PMHS is an award-winning, independent hotel management company, operating full-service and select-service hotels in the Hilton, Starwood, Marriott, and Choice families of brands. The company’s expertise covers all aspect of hotel operations, including development, technical consulting, marketing, accounting, pre-opening services and on-going management. PMHS currently manages over 30 hotels and development projects, comprised of more than 5,500 rooms, throughout the United States. Based in Washington, D.C., PMHS has participated in the development and acquisition/renovation of dozens of hotels with a market capitalization in excess of $1 billion. PMHS is an approved management company for all leading hotel brands. Additional information about the company may be found at www.pmhs.com.

The Buccini/Pollin Group is a privately-held, full-service real estate acquisition, development and management company with offices in Washington, DC, Wilmington, DE, Philadelphia, PA, and New York City. Since 1993, Buccini/Pollin has developed and acquired hotel, office, residential, sports & entertainment, and retail properties throughout the Mid-Atlantic and Northeast having a value in excess of $4 billion. The Buccini/Pollin group currently has under ownership or development 26 hotels, 8 million square feet of office and retail space, 10 major residential communities, and multiple entertainment venues, including PPL Park, home of the Philadelphia Union Major League Soccer team. Buccini/Pollin’s 2,200 associates make a difference in our communities by supporting over 50 vital charities. For more information, please visit www.bpgroup.net. 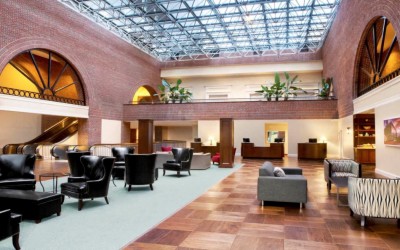