The Buccini/Pollin Group Mentioned in Philadelphia Magazine: A Look Inside the New Marriott Old City

There’s a certain segment of the population, including many hotel designers, that equates luxury and elegance with the traditional Colonial look. That’s why one often runs across hotel buildings that look all modern and simple on the outside, but once inside, they’re all broken pediments, crown moldings, bejeweled chandeliers and wainscoting.

That pretty much describes the cognitive dissonance one experienced upon entering the Sheraton Society Hill Hotel on Dock Street. Then the Buccini Pollin Group got its hands on the property and brought in Krause Sawyer to reimagine it and PM Hotel Group to run it.

It reopened in late January as the Philadelphia Marriott Old City Hotel. And it’s still elegant. But now it’s as modern on the inside as it is on the outside.

New York-based Krause Sawyer — now known as Sawyer & Company — has a penchant for designing ultra-modern spaces with a boutique-hotel ambience even for big chains like Marriott. But in their multimillion-dollar makeover of the old Sheraton, its new owners still wanted to maintain some continuity with its neighborhood’s colonial and 19th-century maritime heritage.

Joseph Bojanowski, president of PM Hotel Group, said this about the redesign in a news release: “While we have totally reimagined this hotel and are now part of the iconic Marriott brand, guests will still experience what they have come to love about this historic 33-year-old hotel.”

Post-makeover, maybe that should be “33-year-young hotel.” 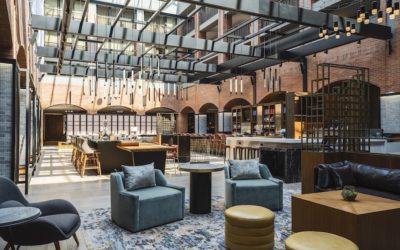