The Buccini/Pollin Group Mentioned In Philadelphia Business Journal: Wilmington is Heating Up

By Kenneth Hilario  – Reporter, Philadelphia Business Journal
Hotels in Wilmington are having a stellar 2019 so far, with the industry outpacing the Philadelphia and South Jersey regions.

That’s a rebound from the 2.3 percent drop Wilmington experienced in 2018.

See the graphs below to compare supply and demand.

“Both the Philadelphia metro and Wilmington hotel performance figures are driven by anomalous year-over-year factors,” said David B. Pollin, co-founder and president of the Buccini/Pollin Group. “In the case of Philadelphia, there were two large January conferences in 2018 that didn’t repeat in 2019. In addition, the 33-day federal government shutdown hurt Philadelphia.”

For most of the shutdown, a number of attractions in the region, including the Liberty Bell and Independence Hall, were unavailable to travelers.

“Wilmington returned to more traditional performance levels in Q1 as the prior year was significantly impacted by a slowdown in rooms demand related to legal cases in chancery court,” Pollin said.

Buccini/Pollin has offices in Wilmington and Philadelphia and has developments in both markets. The company in 2015 acquired the Renaissance Philadelphia Downtown Hotel and in March 2018 bought the to-be-converted Sheraton Philadelphia Society Hill; and its Wilmington portfolio includes the upcoming DECO food hall, the 76ers Fieldhouse complex; and a $30 million Hilton hotels.

Wilmington is going through a development boom. Along with the three Buccini/Pollin projects, also on the horizon is a multimillion-dollar bridge under construction that would connect the Wilmington riverfront to the Southbridge neighborhood; and Kennett Square, Pa.-based Onix Group this summer will open a Hyatt Place and Banquet Center at the Wilmington Riverfront.

“Wilmington fundamentals are solid, with demand from legal activity at chancery court returning to traditional levels from a poor 2018,” Pollin said. “There is a significant amount of demand from consulting firms related to the Dow DuPont merger, but that will wind down in 2019.”

“With three hotel projects either under construction or announced, we are cautious about the medium-term outlook,” he said. “Residential unit growth, hiring downtown by M&T and others, transportation improvements, the new 76’ers Fieldhouse and home of the Blue Coats, and new amenities are creating a more dynamic environment.”

The U.S. Supreme Court in 2017 made a decision in which patent lawsuits intended for other jurisdictions must be filed in Delaware. The decision has the potential to cause more people to travel to the Wilmington area for cases, filling up hotel rooms.

Hotel demand in Wilmington has outpaced supply since at least 2014.

On a full-year basis, demand in Greater Philadelphia grew 6.1 percent year over year in 2018, outpacing the 2.2 percent growth in supply, according to STR data. South Jersey demand grew 10.6 percent in 2018, while supply grew 3.1 percent. 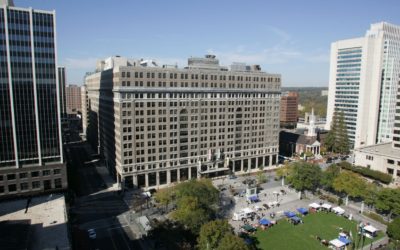