Wilmington Mayor Mike Purzycki today unveiled a comprehensive communications and promotional campaign—“It’s Time”—to highlight the people of Wilmington and the City as a whole. The new image and pride campaign will tell the stories of Wilmington and its people through narratives and videos utilizing multiple platforms for audiences within the City, as well as regionally, nationally and throughout the world. The announcement was made this evening at a Wilmington Love community celebration in Rodney Square where the Mayor was joined by Governor John Carney and City Council President Hanifa Shabazz.

“This is an important and far-reaching campaign,” said Mayor Purzycki, “which is supported by the private sector along with the City and State. We are going to change the Wilmington narrative so that everyone has a greater appreciation—locally and nationally—for Wilmington and its people. From this point forward, more people will know about a different kind of Wilmington, which is the one we know—a City that is proud and welcoming, and a hard-working City that is intent on preserving its neighborhoods, culture, and diversity in order to create more opportunities for renewal. This is very much a grassroots campaign—and its success depends on neighborhood and community participation. The stories we tell will be about the people of our City and about their efforts to make Wilmington a better City.”

Governor Carney, a proud City resident who spoke at today’s celebration, said he’s excited for Wilmington. “Wilmington has been my home for the past three decades, and you can feel the momentum and progress in communities throughout our City,” said Governor John Carney. “It’s true that as goes Wilmington, so goes our state. Wilmington is Delaware’s economic capital, and we all have a stake in its success. I’m pleased to be joining all of our public and private sector partners in helping to tell the story of our City.”

The new communications and promotional campaign establishes a set of shared resources to help neighborhoods and community organizations tell their Wilmington story. These resources include:
• Polling and research to continually solicit local feedback, attitudes and opinions
• Digital tools that include new web-based, social media and YouTube channels
• Public relations to help promote local efforts through regional and national media
Mayor Purzycki said the new campaign does not replace current community-driven efforts such as www.InWilmDE.com, known as the “in” campaign, or any other current promotional effort. Instead, he said, the new campaign will compliment or leverage efforts to promote the City.

The Mayor said the campaign is a megaphone to help tell the powerful stories of Wilmington’s people. To be successful, he said, the campaign needs all citizens to be participants. “We want to hear from all Wilmingtonians,” said the Mayor. “If you know about someone or something awesome in Wilmington, please tell us at http://stories.wilm.love. If you have photos or videos that you think should be a part of our community campaign, submit them to http://media.wilm.love.”

Citizens can participate and support the campaign through www.wilmington.love, www.WilmToday.com, www.InWilmDE.com and through Facebook, Instagram and Twitter @ItsTimeWilmDE. Mayor Purzycki said by sharing the campaign with others, Wilmington residents can help change the narrative about their City.

Mayor Purzycki today expressed his appreciation for the private sector support for the campaign, which totals more than a half-million dollars to enable Wilmington to tell a more complete story about itself and its citizens in a consistent and continual fashion. The campaign’s private sector partners include Barclays, Capital One, CSC, Epic Research, Incyte, JP Morgan Chase, Chemours and WSFS. In addition, the State has contributed $250,000 and the Mayor has pledged a $70,000 contribution from the City. 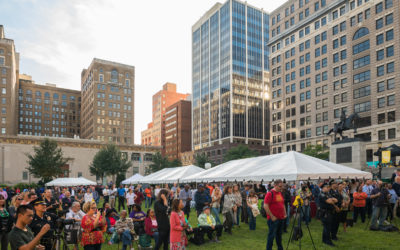