The Buccini/ Pollin Group Featured on Technical.ly.com: Could the DuPont Building become the hippest spot in town?

The DuPont Building at 1007 N. Market St. has been a lot of things in its 110 years of existence. It’s a historical landmark, a symbol of early 20th-century economic prosperity, a posh tourist destination. Overlooking Rodney Square in the center of Wilmington, it was a brick-and-mortar reminder that DuPont was the heart of Delaware.

But it was never really cool. Sure, you could catch a touring production of Kinky Boots at The Playhouse on Rodney Square or have afternoon tea in the opulent Green Room at the Hotel du Pont, but it’s so heavily connected to its legendary chemical corporate roots — and the merger that would break the DuPont spell in Delaware — that it might seem like little more than a relic.

When the Buccini/Pollin Group announced the purchase of the DuPont Building last April, it was clear it had no intention of letting the building flounder. 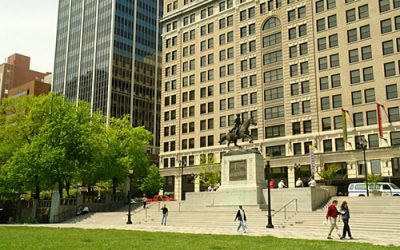