The Buccini/Pollin Group proudly congratulates Co-Presidents Chris Buccini, Rob Buccini, and Dave Pollin and all the honorees of this year’s Power 100 List!

“The Philadelphia Business Journal’s Power 100 List is a group of influential leaders from various industries across the region. The 2022 list features familiar names from years past, as well as dozens of new faces — an indicator of Greater Philadelphia’s evolving business community.

To be clear, the Power 100 is not a ranking, but rather a guide that aims to reflect the most influential people at this moment in time.

The editorial staff of the Business Journal selected those who made the list, which does not include elected officials. Profiles of the Power 100 were written by Business Journal reporters.

The staff considered not only those who hold powerful positions, but also those helping to shape the future of their respective industries. The list is intended to go beyond just a “who’s who of CEOs,” and selections were made across a variety of sectors holding important roles in the Philadelphia economy.

From real estate, economic development and health care to hospitality, tourism and higher education, this year’s Power 100 shows the scope of industries that play key roles as economic engines throughout the region. Many of the names selected are not only having an impact locally but also nationally — if not globally…

Under the leadership of brothers Chris and Rob Buccini, as well as co-president Dave Pollin, Buccini/Pollin Group Inc. has been instrumental in transforming Wilmington’s waterfront and revitalizing the city’s Central Business District with apartments, renovated office buildings and restaurants, as well as entertainment and sports venues including the 76ers Fieldhouse. The company’s work has helped usher in a renaissance in Delaware’s largest city.” 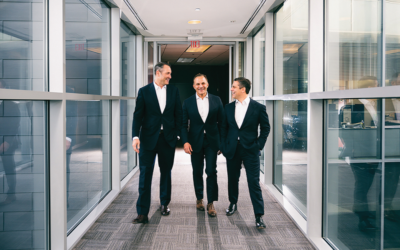