The Buccini/Pollin Group’s Co-President Chris Buccini spoke on the significance of The Chemours Company’s new headquarters in Downtown Wilmington, Delaware during the grand opening ceremony at the Dupont Building on Tuesday, January 15, 2019.

Buccini noted that it would have been much easier for Chemours to build their headquarters elsewhere, but “instead of leaving, Chemours made the very difficult decision to stay. They decided to embrace their heritage, to remain in their ancestral home of the 200-year start-up that they are today, and to take a very big chance. And they did it right here in the absolute center of our city…They saw a city surrounding them that was in the midst of an exciting revitalization, and they wanted in.”

Watch a clip of Chris Buccini’s remarks in the video below.

Video footage of the ceremony was captured by WDEL in “Chemour Takes Over Where DuPont Left Off”. 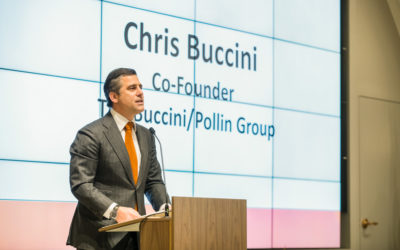