Governor Carney, City of Wilmington Mayor Mike Purzycki, 4th District Council Member Michelle Harlee, and Members of the Board of the Christina Gateway Corporation joined BPG officials Rob Buccini, Co-President and Co-Founder, Mike Hare, Executive Vice President of Development, and Christine Schontube, Vice President of Residential Operations, to celebrate the grand opening of The Cooper with a ribbon cutting ceremony and garden party on Thursday, May 27th at 4:00 PM.

The Cooper offers studios, one, and two-bedroom apartment homes with open floor plans and sleek finishes that will make you feel right at home the moment you step inside. The property features amenities meant to make the most out of your every-day lifestyle, including a rooftop deck overlooking Market Street, a stunning courtyard reminiscent of Scandinavian architecture, and a fitness center with Peloton equipment. The pet-friendly community also features the only apartment building with a designated dog-run in the Downtown. With unbeatable access to the Wilmington Train Station and Transit Center, local employment hubs, and neighborhood attractions in Downtown Wilmington and on the Riverfront, The Cooper is the ideal home for those who want it all.

The Cooper, as noted in the name, pays tribute to the former Cooper Furniture Store that previously occupied the site at 212 N Market Street in the 1950s with its iconic sign on King Street. The design of the present-day Cooper honors the rich history of the location by refurbishing the original cast-iron façade built in 1874 by Royer Brothers of Philadelphia, also known for the iconic facade work of The Grand Opera House just up the street.

Previously owned by the Christina Gateway Corporation, the City of Wilmington were stewards of The Cooper building for over a decade and took great strides to preserve it for future development. The Buccini/Pollin Group built upon their efforts by incorporating the historic façade into the architecture and investing in its restoration. The final design features two 5 story buildings on either side of the façade connected by a glass walkway overlooking the courtyard.

The $25 million development continues to achieve BPG’s strategic mission in Wilmington of taking abandoned and underutilized buildings and transforming them for modern use. This project combined the former Cooper building with several other parcels that were unfit for modern use.

The occasion also signified the continued progress of the downtown revitalization movement on Market Street. The majority of development in recent years has been concentrated to the upper half of Market Street. The Cooper will bring roughly 140 people to the 200 block, impacting the broader strategy to build critical mass Downtown.

“This is another exciting opportunity for Delaware, and it will help attract a talented workforce by providing even more options for folks to have easy access to transportation and explore great restaurants and small businesses downtown,” said Governor John Carney. “Businesses continuing to make investments like this in the City of Wilmington proves that Wilmington remains a city on the rise. And this new complex is just one part of a comprehensive effort to strengthen our largest city.”

“Today’s opening of The Cooper is the latest addition to the already bustling LOMA section of the Downtown District, and is further evidence that Wilmington continues to be an attractive place to live, work, raise a family and have fun,” said Wilmington Mayor Mike Purzycki. “It is also a continuation of the remarkable availability of housing options in our Downtown District neighborhood in recent years, thanks in no small part to our partners at BPG, whose continued investment and belief in the future of Wilmington is unwavering.”

To date, BPG has brought over 1,900 units to the residential market in Wilmington and has another 500 units under development or construction, including Crosby Hill which was announced last week. In March of 2020, BPG opened 13 units on Market Street at 713 MKT. In September of 2020, BPG opened the first living experience in the DuPont Building with the new 198-unit community at 101 dupont place. Despite the pandemic, BPG’s residential portfolio is stabilized above 92% occupancy across the board, reinforcing the company’s unwavering confidence in the Wilmington residential market.

“When we broke ground on this project in December of 2019, we all had no idea it would be our last milestone development event as a company before COVID-19 struck our community. What an honor it is to stand here today to celebrate the completion of this beautiful building as our first grand opening event following the pandemic,” said Rob Buccini, Co-President of The Buccini-Pollin Group. “The Cooper would not be possible without the unwavering commitment and support from all our partners, including Mid Penn Bank, the Christina Gateway Corporation, Office of Economic Development, Delaware State Housing Authority, DIGSAU, BPGS Construction, and ResideBPG.”

The Cooper is already home to a handful of residents who were drawn to the buildings striking design.

“The Cooper is a hidden gem. I literally looked all over the city, and this property was hiding in the middle of it all,” said resident Afiyaa Fickling. “From the moment I walked in the front entrance, I fell in love and couldn’t wait to see what was inside. I’m so happy I didn’t give up on downtown living because this place is pretty perfect.”

For more photos from the Grand Opening, please visit our Facbook Page. 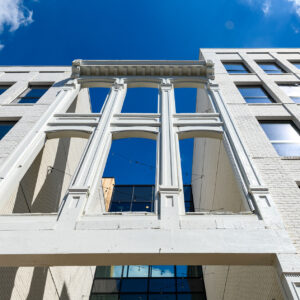 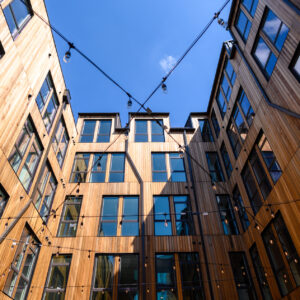 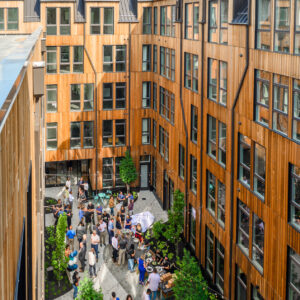 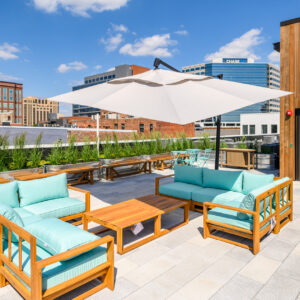 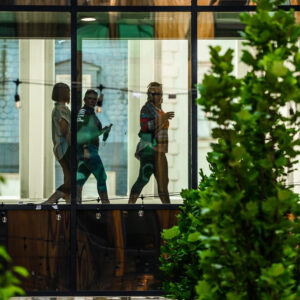 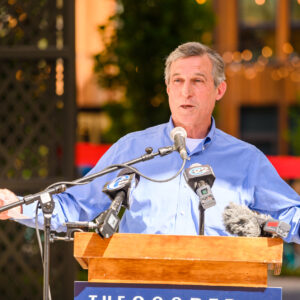 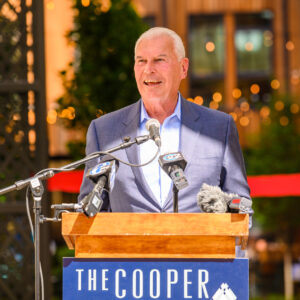 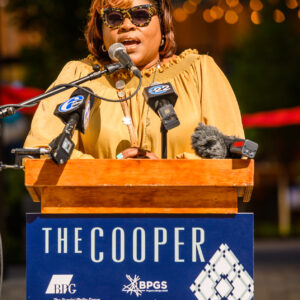 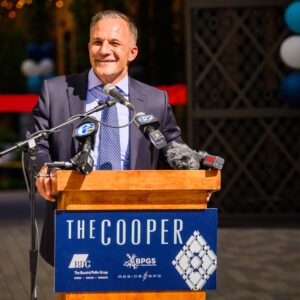 Rob Buccini, Co-President and Co-Founder of The Buccini/Pollin Group 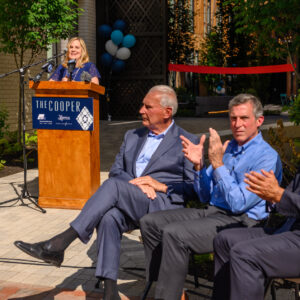 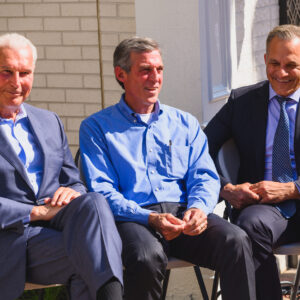 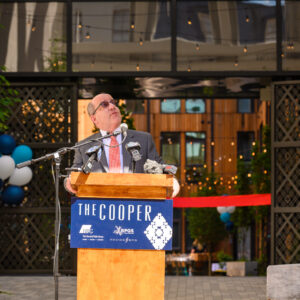 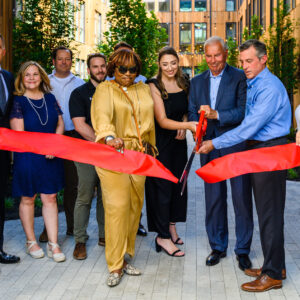 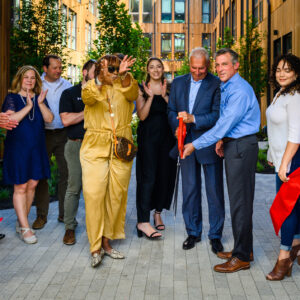 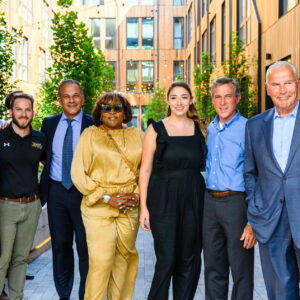 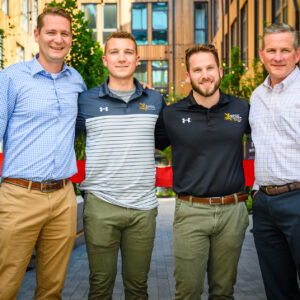 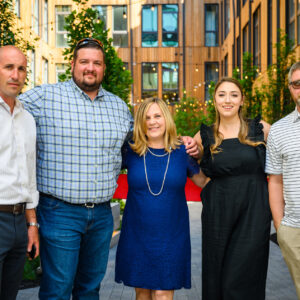 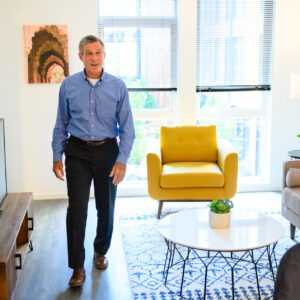 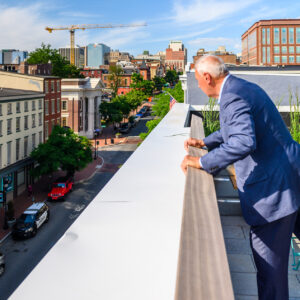 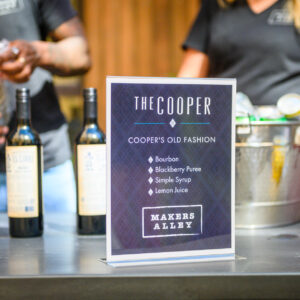 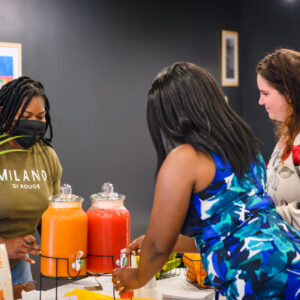 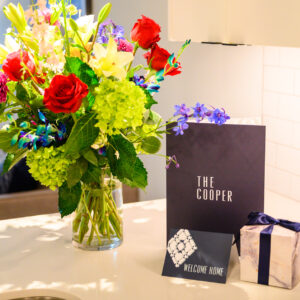 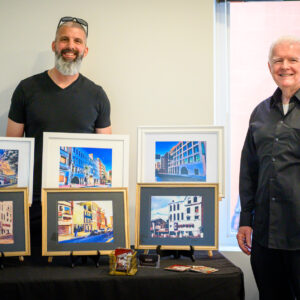 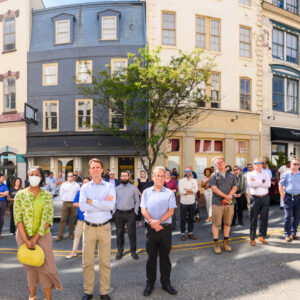 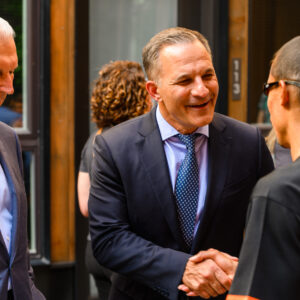 Mayor Purzycki and Rob Buccini meet artist Geraldo “King of Transit” Gonzales, whose artwork is on permanent display at The Cooper 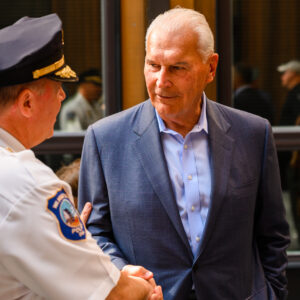 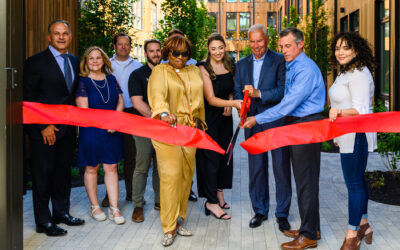