PITTSBURGH, PA, March 5, 2020 – Live Nation Entertainment, Inc. (NYSE: LYV), the world-wide leader in live music promotion and venue operation, will anchor a 90,000-square foot live entertainment venue on the former Civic Arena development site in the Lower Hill.  The announcement was made today by the Pittsburgh Penguins, together with its development partner The Buccini/Pollin Group (BPG), the master commercial real estate developer for the 28-acre site of the former Civic Arena.

The new live music venue will be constructed above an underground 850-space public parking garage at the intersection of Wylie Avenue and Logan Street, at the center of the Penguins’ Lower Hill redevelopment site.  The venue’s design will be a “three-in-one” concept, including an enclosed highly-amenitized seating area for club and theater performances as well as an adjacent outdoor amphitheater lawn.  Filling the gap for mid-sized live music venues in the Pittsburgh area, the unique design accommodates intimate live music events as well as medium to larger performances, up to a 6,600 maximum total capacity.

The venue will complement the larger PPG Paints Arena across Centre Avenue (capacity 18,000), energize the local music scene and help the region become even more of a destination for a diverse range of bands, concerts and shows.  Examples of similar live music venues recently developed in other cities illustrate an overall increase in total music shows resulting from the investment in new facilities, as it will enable Pittsburgh to land acts that pass over the city due to the lack of a suitable mid-sized venue.

“There will not be another venue like this in the region, and we expect it will become the entertainment anchor for the Lower Hill, drive significant business to nearby restaurants and contribute to the rich fabric of live music in Pittsburgh,” said David Morehouse, Chief Executive Officer of the Penguins. “Live Nation brings worldwide top-of-class experience, and the ability to adjust and adapt to different sizes of shows, indoor and outdoor, all in a vibrant urban development area, will quickly establish this facility as very unique for Pittsburgh.”

President of Live Nation Pittsburgh Tom Loudermilk said, “Ever since we established our full-time office in Pittsburgh, we’ve been focused on adding a music venue within the urban core of the city.  Simply put, there is no better location for us and we could not have asked for better partners than we have with the Penguins and BPG.  We believe this venue will complement the existing set of venues throughout the market to further enhance the live music experience for all fans.”

As complement to the Live Nation music venue development, the Penguins have also been in discussions with local entertainment operators about establishing adjacent intimate jazz and live entertainment concepts along Wylie Avenue, which has a rich legacy of live music going back over a century in the Lower Hill District neighborhood of the city.

In addition, the Live Nation project is expected to help catalyze investments into the middle and upper Hill District, including the Ammon Community Recreation Center, August Wilson Boyhood Home, New Granada Theatre, and programming at Miller Elementary and University Prep public schools.   These investments will also be supported by the expected $40M Greater Hill Reinvestment Fund generated from the overall Lower Hill Development.

The music venue will be comparable to two newer entertainment venues that have anchored leading mixed-used districts across the country – The Anthem in Washington, D.C. and Toyota Music Factory in Irving, Texas.  As part of an overall $1 billion private investment in the Lower Hill, the music venue and public parking garage will comprise a $120 million mixed-use development on the 2.5-acre Parcel E on the Lower Hill redevelopment site. The project will also include:

The project will deliver parking capacity for adjacent commercial development in the new district and nearby employment centers.  It will also be a critical fiscal stimulus for both City and neighborhood use in the form of over $400,000 in annual amusement taxes payable to the City of Pittsburgh and approximately $5 million in 10-year tax abatement (LERTA) benefits that the development invests in the Greater Hill Reinvestment Fund to support economic development priorities.

The Penguins and BPG are also building as part of the music venue development a brand-new public safety facility (worth over $1.2 million) for Rescue 2 and EMS 14, on the Bedford Avenue side of the parking garage, which will centralize EMS rescue operations on the Lower Hill and improve public safety responsiveness.  The relocation of the facility to the Lower Hill will also allow the City of Pittsburgh to take advantage of a potential redevelopment opportunity downtown at the current Rescue 2 / EMS 14 location on the Boulevard of the Allies.

BPG’s vision is to create one of the finest entertainment-based mixed-use projects in the United States.  “Live Nation’s 20-year commitment to this project will serve as the second entertainment anchor, along with PPG Paints Arena, and bring this transformational project one step closer to fulfilling its vision.  BPG is excited to be partnering on its second live music venue with their friends at Live Nation.” said Chris Buccini, co-President of The Buccini/Pollin Group.

Boris Kaplan, BPG’s Vice President of Development said, “This project will complement the recently announced FNB Tower, create a powerful demand generator for other retail and entertainment across the district, and bring to over $400 million the components of the larger redevelopment that have been announced to date.”

BPG anticipates a groundbreaking in Summer 2020 and initial Live Nation and retail occupancies by early 2022. BPGS Construction, LLC, will continue to oversee the development process offering guidance to the design, entitlement and construction efforts for the Live Nation project and complimentary development across the site.

The operators expect that the music venue will be activated over 200 nights a year with ticketed shows and corporate events, providing a robust and energetic entertainment destination at the heart of the city and growing mixed-use district.

“This Live Nation venue and the accompanying parking, retail and commercial space will be yet another exciting development for the Lower Hill,” Morehouse said. “With our recent announcements on advancing the first phase of housing and the construction of the FNB Tower, we have strong momentum on the Lower Hill.”

For information on leasing opportunities:

BPGS is a Construction Management company based in Wilmington, DE, serving the MidAtlantic region and beyond. Since 1999, BPGS Construction has developed and constructed hotel, office, residential, sports & entertainment, and retail properties throughout the United States. For more information, please visit www.bpgsconstruction.com. 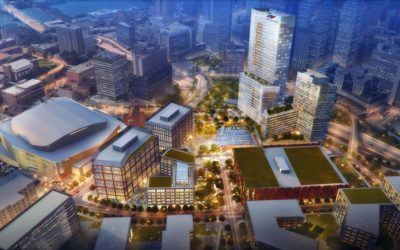