Wilmington-based developer, The Buccini/Pollin Group, Inc. (BPG), F.N.B. Corporation (FNB), the Pittsburgh Penguins, and Clay Cove Capital are delighted to announce the closing on over $200 million of construction financing for the 26-story FNB Financial Center project, located in the Lower Hill District of Pittsburgh, on Friday, September 10, 2021. Equity for the project has been provided by Clay Cove Capital, one of the largest minority-owned real estate investment firms in the country. This is one of the largest community reinvestment projects in the state of Pennsylvania and has been recognized as a model for inclusive development around the United States. A ceremonial groundbreaking for the project was held earlier this month as well.

“We are proud to achieve such important milestones for this transformational project – one that’s made possible by the strong partnership behind the FNB Financial Center,” BPG Co-President Chris Buccini said. “This partnership is made up of champions, and this project would not happen without our partners’ love of their hometown and our collective commitment to making Pittsburgh a better place for all its residents. We are excited about the future of this City, this community, and this significant investment, and look forward to working together to make great things happen in the Historic Hill District.”

The team’s community reinvestment efforts received a major boost from closing, as the transaction delivered over $7 million of monetized tax abatement benefits to the community-directed Greater Hill District Reinvestment Fund. The funding will be used to invest in development projects and other community needs in the Greater Hill District as outlined in the Community Collaboration and Implementation Plan (CCIP) between the neighborhood and the developers.  Possible applications for the funding could include local redevelopment projects, youth education programs, rent and mortgage assistance and other wealth-building and capacity-building efforts.

Bomani M. Howze, Vice President of Development for the Buccini/Pollin Group, said, “We are excited to have delivered on our promise of the first installment of $7.2 Million toward the Greater Hill District Neighborhood Reinvestment Fund. The tax abatement monetization from the FNB Financial Center symbolizes a critical delivery on our commitment to ensuring that catalytic Lower Hill projects are developed to have lasting impact in the Middle and Upper Hill District.”

No other development in the city of Pittsburgh has ever generated such a large degree of direct cash impact to help invest in adjacent underserved neighborhood.

“I am grateful that we are not only seeing the development in the Lower Hill move forward to right the wrongs of the past and create opportunities in the historic Hill District, but that our development partners are demonstrating their commitment to the Hill community by providing community investment funding up front,” said Pittsburgh Mayor William Peduto. “I’d like to thank all of the partners in this development and the Hill District community for creating a model where communities and developers can work together to help ensure the community benefits and drives investment in their neighborhood from these developments.”

Based on estimates, the Lower Hill tax abatement district could generate up to $40 million overall for the Greater Hill beginning with the FNB Financial Center. The 26-story mixed-use tower is designed to kick-start the redevelopment of the historic Pittsburgh neighborhood and serve as the corporate headquarters of FNB, the parent company of First National Bank.

“This point is the beginning of a transformational development not only for the Lower Hill, but the region,” said David Morehouse, CEO of the Pittsburgh Penguins at the office tower’s September 1st groundbreaking ceremony.

The tower is expected to generate 1,250 construction jobs, 2,000 permanent jobs and over $40 million in investments in the Middle and Upper Hill District. It will contain more than 475,000 square feet of Class A office space, consolidate FNB’s regional headquarters operations, and include open space and terraces for community events at the adjacent Plaza at FNB Financial Center. Construction of the tower at Bedford Avenue and Washington Place will further restore connections between the Greater Hill District and Downtown Pittsburgh and is the first step in an estimated $1 billion redevelopment of the 28-acre former Civic Arena site led by BPG, the Pittsburgh Penguins and their partners.

To expand participation by minority and women-owned businesses in the project, the development team hired e-Holdings at the start of the year to boost inclusive procurement efforts.  In June, the Penguins and BPG opened the First Source Center on Centre Avenue as a one stop shop for those seeking assistance with employment and contracting opportunities at the site, which, following construction of FNB Financial Center, will next include a live music venue, parking garage and housing.

Construction of FNB Financial Center will be led by P.J. Dick. Internationally renowned Gensler is leading the design team for the project. The Pittsburgh office of JLL is responsible for commercial leasing efforts.

Construction of FNB Financial Center and the Plaza is expected to be completed in late 2023. 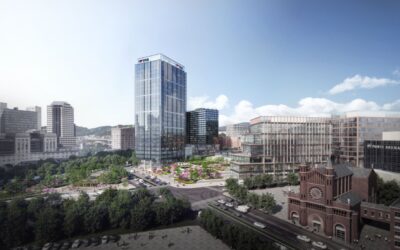