“As an owner/operator, we seek to be on the cutting edge and have pioneered a number of hotel concepts with Hilton, Inc., including the smaller format, Tier II Embassy Suites prototype and several dual-branded hotels, as well as urban adaptations of the Homewood Suites and Embassy Suites brands in Manhattan,” Pollin said. “All were well received by our guests, and we believe the Canopy brand will quickly become a market leader in the upper upscale lifestyle segment.”

“We are thrilled to ‘Say Hello to the Canopy Washington, D.C./Bethesda North’ as the first North American Canopy by Hilton hotel to celebrate its topping off,” said Gary Steffen, global head, Canopy by Hilton. “The vibrant neighborhood serves as an ideal location given its ability to act as both a business hub and recreational destination with attractive and unique shopping, dining and entertainment opportunities, and we look forward to welcoming guests later this year.”

The hotel is a key part of the second phase of Pike & Rose, a new, mixed-use development that is reinventing one of the region’s most successful retail corridors. The t-shaped, four-block complex features numerous dining, retail and entertainment options.

“In addition to the construction jobs created, the hotel will add more than 100 permanent jobs upon opening,” Leggett said. “This is one of the most dynamic areas in the county, and we expect great things from this new development.”

“This is a very guest-centric hotel, which matches up well with our operating philosophy,” Bojanowski added. “We are well versed in the upscale and boutique hotel segments, having operated many properties in these classes. Its high-profile location in a major, new development will showcase the brand and be a major factor in attracting business and leisure travelers, as well as locals, to the Pike & Rose development.”

Adding to the acclaimed restaurant offerings within walking distance, the hotel will feature a bistro signature to the Canopy by Hilton brand that highlights D.C. favorites like soft shell crabs and half-smokes from Ben’s Chili Bowl. With an eye on authentic locality, produce will be sourced from Maryland farms situated within 50 miles of the hotel, and the bar will serve local brewery beers, including Baying Hound Aleworks in Rockville, Denizens Brewing Company in Silver Spring and Flying Dog Brewery in Frederick, as well as DC Brau Brewing Company. Additionally, guests will have access to gluten-free Meringue Rose Cookies from Bethesda’s Red Bandana Bakery.

About Canopy by Hilton

Canopy by Hilton is the energizing, new hotel in the neighborhood offering simple guest-directed service, thoughtful local choices and surprisingly comfortable spaces, so guests simply feel better going forward. Each property is designed as a natural extension of its neighborhood, with local design, food and drink, and delivers a fresh approach to hospitality and the guest experience. Canopy by Hilton is the lifestyle hotel brand of Hilton Worldwide. Learn more at www.canopybyhilton.com.

The Buccini/Pollin Group is a privately held, full-service real estate acquisition, development and management company with offices in Washington, D.C.; Wilmington, Delaware; and Philadelphia, Pennsylvania. Since 1993, Buccini/Pollin has developed and acquired hotel, office, residential, sports & entertainment, and retail properties throughout the Mid-Atlantic and Northeast having a value in excess of $4 billion. The Buccini/Pollin Group currently has under ownership or development 30 hotels, 8 million square feet of office and retail space, 10 major residential communities, and multiple entertainment venues, including PPL Park, home of the Philadelphia Union Major League Soccer team. Buccini/Pollin’s 3,000 associates make a difference in our communities by supporting over 50 vital charities. For more information, please visit www.bpgroup.net.

PM Hotel Group is a top 25, award-winning hotel management company, operating full-service and select-service hotels in the Hilton, Marriott, Starwood, IHG and independent families of brands. Celebrating its 20-year anniversary, the company’s expertise covers all aspects of hotel operations, including development, technical consulting, marketing, accounting, and pre-opening services. The company manages nearly 40 hotel and development projects, comprised of more than 9,000 rooms, throughout the United States. Based in Washington, D.C., PM Hotel Group has participated in the development and acquisition/renovation of dozens of hotels with a market capitalization in excess of $1.5 billion. PM Hotel Group is an approved management company for all leading hotel brands. Additional information about the company may be found at www.pmhotelgroup.com. 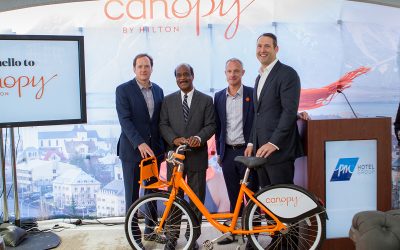