Additionally, BPG announced the opening of a new Pittsburgh office at the JLL Center at Tower Two-Sixty on Forbes Avenue, partnering with JLL, its commercial broker for the Lower Hill redevelopment.

BPG and local partners the Pittsburgh Penguins plan to break ground on the next phase of the development in early 2021.

The Lower Hill development team has been expanded to include four Hill District residents, intended to catalyze BPG’s neighborhood revitalization program in alignment with the Community Collaboration and Implementation Plan (CCIP) that was established to guide equitable development on the Lower Hill:

These initial contracting commitments have been released just as the project enters the pre-development home stretch in anticipation of a Q2 2021 groundbreaking. The project’s designer and builder will further enhance this local team as the effort continues to move forward.

“What sets the 28-acre project apart from others is that it will be led by and engages with local Black artists, companies and leaders,” Mayor Peduto said. “By working hand in hand with both community stakeholders and private developers, we are investing in a future that is directly built by its residents. I am proud of the work of our partners and collaborators on this critical work, and especially want to thank URA Executive Director Greg Flisram and Deputy Executive Director Diamonte Walker.”

“It cannot be understated how critical these hires are. I have continually stated that this development should be to the explicit economic and social benefit of the African-American and Hill District community. Hiring four African-American firms that both live and are headquartered in the Hill District are monumental steps towards achieving both objectives,” Councilman Lavelle said. “What’s more, the complete set of firms hired will go a tremendous way in ensuring this is an equitable development centered with the concerns and needs of the residents of the Hill District not just in mind, but also in practice.”

“I want to thank the Penguins and BPG for their commitment to the Lower Hill, as this development will have an immediate and positive economic impact on the Hill District neighborhood and create thousands of jobs to help with our recovery out of the pandemic,” said State Rep. Jake Wheatley.

In recent weeks, the largest mixed-use, multi-tenant office project in the City of Pittsburgh completed its financing requirements to advance toward construction, with an infusion of equity from minority-owned Clay Cove Capital, LLC. BPG received preliminary project approvals from the Urban Redevelopment Authority of Pittsburgh as well as the Sports and Exhibition Authority in May 2020.

BPG’s Vice President of Development Boris Kaplan observed: “We are delighted to complement the strong team we already have in place by welcoming professionals of such high caliber, inspiration and in-market credibility. The Lower Hill is going to be a destination comparable to the very best mixed-use projects across the country and we are adding crucial horsepower and diversity of skillsets to the team at a pivotal juncture in the project’s development.” 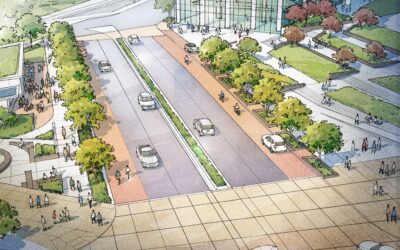