Live Nation has Found a New Home in Wilmington!

On June 14, 2017 a “Changing of the Guards” Ceremony was held outside of The Queen at 500 N Market Street in Wilmington, DE.

Live Nation, the global entertainment company, formed from the merger of Live Nation and Ticketmaster took over operation of The Queen, a property near and dear to The Buccini/Pollin Group and BPGS Construction.

During the ceremony, Chris Buccini relived his first time touring the theater, when it was vacant, falling apart and he could look up from the main space and see the sky because of a massive hole in the roof.

Through dedication, a whole lot of patience and  individuals from the City and State determined to restore Wilmington, The Queen was brought back to life on April 1, 2011.

Today it is recognized by one of the top entertainment companies in the world as a place they are proud to call home.

Join us in congratulating all of those who were a part of The Queen’s story. We look forward to its thriving future, with lots of surprises in store, including a new outdoor bar in the previous retail space and renovations.

Local favorites as well as new genres and major acts will fill the historical space with loyal fans and music. Shine A Light will continue as well as the good works of The Light Up the Queen Foundation.

We couldn’t be more thrilled, and we welcome our new friends from Live Nation with open arms. 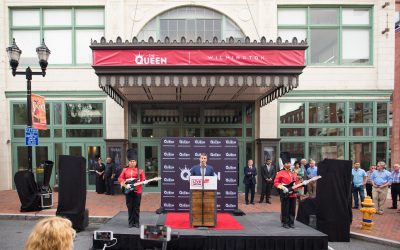