Guests were invited to sign the last piece of structural steel, followed by speeches from officials and the beam was raised to the top of the six-story structure.

Expected completion of the Homewood Suites by Hilton Hotel is September 2019. Known for their upscale atmosphere and spacious one & two-bedroom suites with a full kitchens & fridge, Homewood Suites Wilmington will offer free, hot breakfast daily, along with complimentary evening socials.

The latest advancement on the thriving Christiana Riverfront, Homewood Suites Wilmington will take advantage of the convenient location near the new bridge under construction to connect the Riverfront with the Southbridge neighborhood. Upon completion, the hotel will be managed by PM Hotel Group, an award-winning hotel management company currently overseeing more than 10,000 rooms throughout the United States. 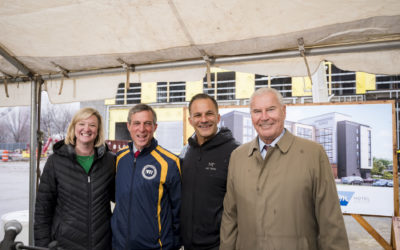