DECO is thrilled to announce all of the food hall’s chef-tenants, bringing eight new restaurants to Wilmington under one roof in the rejuvenated ground floor of the historic Dupont Building at 10th and Orange Streets. The Buccini/Pollin Group and Seawall, Mayor Mike Purzycki and City Council President Hanifa Shabazz welcomed DECO’s tenants to Wilmington in a grand reveal press conference, Thursday afternoon March 28, 2019. Chef-tenants at DECO will include:

DECO’s Grand Opening is fast approaching: the food hall, bar and event space will officially open to the public at 5 p.m. on Thursday, April 18, with celebratory events and festive surprises throughout the evening and until 12 midnight on Friday, April 19.

Managers Imian Partners bring their hospitality expertise to bear, channeling the runaway success of the nearby Constitution Yards Beer Garden as they make DECO a centerpiece of downtown Wilmington’s resurgent restaurant scene. In preparation for staffing DECO’s full-service food hall operation, two job fairs were held at The Mill Coworking Space located on the fourth floor of DECO’s sister building, The Nemours Building. With opportunities for everyone to fill there was a healthy turnout for 100 open positions in both the front and back of the house. Applicants came for on-the-spot interviews at The Nemours Building

Following the grand opening, DECO will be open for breakfast, lunch, dinner and bar service, weekdays starting at 7 a.m. and closing at 11 p.m., with extended hours on weekends, bringing a lively new food-and-drink destination to downtown Wilmington, morning through late night, seven days a week. We look forward to enjoying the cuisine and atmosphere in the prominent downtown hub – re-imagined. 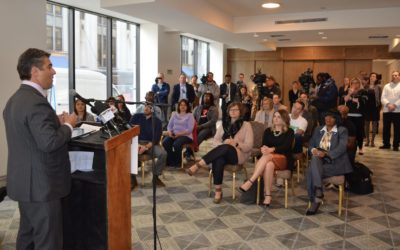