WILMINGTON, DE-Wilmington-based developer, The Buccini/Pollin Group, Inc. (BPG) is pleased to announce the next expansion of their MKT portfolio along the Market Street corridor. This marks a major moment for the area that has been progressing through a redevelopment that has seen great momentum over the last several years. In the last few weeks, BPG has acquired three new properties totaling over 60,000 square feet downtown that will be redeveloped into apartments above their ground level retail space.
The additional apartments will be a part of the existing MKT brand which encompasses 114 existing apartments from the 400 to 800 Market Street blocks. The building located at 829 Market Street will be converted by local design/build firm Montchanin Design to house 7 open floor plan studios and one bedroom apartments. The ground floor retail space will be a future restaurant; BPG is finalizing the lease with the new operator.
The second newly acquired building is located at 2 E. 7th Street at the corner of 7th and Market. The redevelopment of the property is being designed by Studio JAED and will be constructed by BPGS Construction. The project will include an extensive exterior renovation that will bring back a level of historical detailing from its days as Snellenburg’s Department Store, restoring the building to a notable corner building status and historical compliment to BPG’s other recently developed buildings in the 600 block. The building will house 15 one-bedroom and one-bedroom-den apartments as well as an attractive and highly visible corner retail space on the ground floor. The new retail space sits directly across the street from Market Street’s first Starbucks® store which is currently under construction and set to open in early October.
The third new downtown acquisition is located at 200 W. 9th street is a seven story existing building at the corner of 9th and Orange. The acquisition of this building further demonstrates BPG’s commitment to moving the revitalization of the downtown west of Market Street, as it sits directly west of BPG’s The Residences at Mid-town Park construction site. 200 W. 9th was originally built in 1938 by renowned local architect G. Morris Whiteside in the art deco style and is being currently designed by Homsey Architects, Inc. and will be constructed by BPGS Construction. The property will be converted from office space to house 30 one-bedroom apartments above three ground floor live/work units, which offer unique layouts providing sidewalk accessible office/studio spaces with living quarters behind.
These 33 apartments, combined with the 198 apartments being built at the Mid-town site, will mean hundreds more people not just calling Market Street home, but a revitalized downtown neighborhood home.
Robert Buccini, Co-President of the Buccini/Pollin Group explained, “We are excited to continue the growth of downtown apartment living and additional neighborhood amenities such as the Starbucks® to support the residents. We are seeing a trend with each wave of new residential activity, a corresponding wave in retail activity. The Starbucks® is only the beginning of the latest retail wave.” 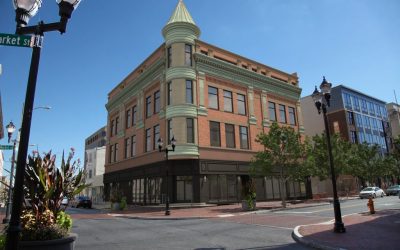