Do you love where you work? At The Buccini/Pollin Group, we have an annual Ping-Pong Tournament!

This year’s tournament was an intense single-elimination style tournament that started with 29 of BPG’s most infamous ping pong enthusiasts and athletes. Over the course of 2 months, associates went head-to-head in a best of 3 series, the first player to reach 11 points and win by 2.
Players that made it to the final four included Karl Wagner, Robert Herrera, Jerry Zhong and Michael Edelin leading to the final championship. The championship was designed to bring out the best between the two opponents and the match was a best of 5 series, each game to 11 points.
The BPG associates rallied around the ping pong table in the cafeteria Thursday afternoon to watch the final two players face off, Jerry Zhong and Robert Herrera.  Jerry Zhong defeated Robert Herrera 3-1, taking home the trophy. There was great sportsmanship all around.
Associates enjoyed fellow co-workers, beverages and snacks. We can’t wait to see who wins next year!
Want to join a workplace that takes fun as seriously as hard work? Check out our current opportunities! 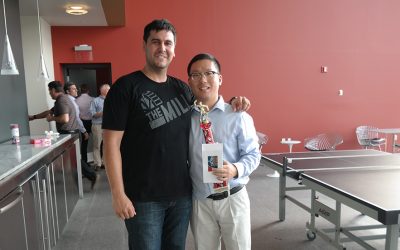