Volunteers from the Buccini/Pollin Group (BPG) were delighted to give back to the community on November 22nd at Reed’s Refuge by serving Thanksgiving Lunch at Reed’s Refuge Center. Reed’s Refuge partnered up with the organization For The Love of Others to serve 500 homeless and needy.

Reeds Refuge Center (RRC) is an award winning, non-profit organization dedicated to the physical and emotional well-being of the children and financially challenged families within our inner-city communities. RRC was recently awarded the Governor’s Award of Excellence – New Castle County Employer of the Year and the Community Excellence Award from the Rick VanStory Resource Center (RVRC). In addition, RRC received recognition from the City of Wilmington for servicing its citizens. Each day, RRC provides nearly 100 youth with a safe-haven from the streets infused with violence, drugs and guns. At Reeds Refuge Center, children and young adults are offered the opportunity to express themselves and seek refuge in the arts. Through programs and caring staff, RRC offers the local youth, hope, motivation, and courage to live for something above and beyond the lure of a life of crime or dependency.

For the Love of Others founder, Lauren Puryear has taken on the task of feeding 30,000 hungry and homeless people by her 30th birthday, September 14th, 2017 by couponing.To date, more than 12,000 people have been fed. According to Puryear, she can feed 150 people for as little as $20, depending on the items. Puryear has provided meals in cities such as Paterson, NJ, Baltimore, MD, Richmond, VA, Charlotte, NC and Washington, DC. Puryear has been featured on Good Morning America, the Steve Harvey Show, and in media internationally. The meal at Reeds Refuge Center will be the first meal in Delaware.

The event was a part of BPG’s Season of Giving, each year around the holidays, The Buccini/Pollin Group devotes time, gifts and monetary donations to local organizations in Wilmington,DE.

Pamela Gardner, Manager of Executive Relations and Community Engagement explained, “Giving back to the communities in which we live, work and play is deeply rooted in our organization’s mission and associate’s values.  While  serving the community is a year round focus for BPG, the holiday season is a special time where we are compelled to do more for our neighbors who have less. It is an honor and privilege to kick off our 2016 Season of Giving in partnership with Reeds Refuge serving Thanksgiving to Wilmington’s families and youth. 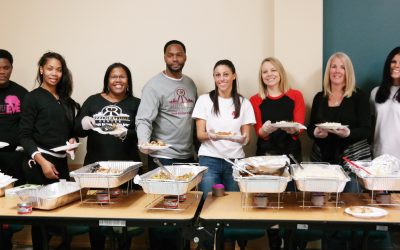