The mistakes and unfulfilled promises that were made in the 1960s when the Civic Arena was built in Pittsburgh’s Lower Hill District won’t happen again, one of the people involved with the redevelopment project for the site said Wednesday.

The plans are different now. They’re inclusive of Black residents and others in the neighborhood, and there’s a commitment to revitalize the area in its entirety, said Kimberly C. Ellis, a Hill District resident who serves as a historical consultant for the project.

Ellis was among the major players in the long-talked-about redevelopment of the former Civic Arena site in Pittsburgh’s Lower Hill District who were part of a virtual roundtable Wednesday evening to detail the plans.

The redevelopment will be anchored by a new $220 million headquarters for FNB Corp. on the 28-acre site as part of the first phase of the project.

But those who participated in the roundtable focused on how the plans will include the Hill District as a whole.

“Our commitment doesn’t end when we break ground” is how Brent Semachko, a senior vice president of FNB Corp., put it.

When the Civic Arena was built, there were plans for more than an arena and parking lot, but they didn’t come to be.

Instead, the neighborhood was razed, residents were displaced and the process left lingering scars that have created skepticism about any future project.

There are written commitments that will hold people accountable for their promises, she said.

Among the leaders of the project is Bowmani Howze, who is from the neighborhood. He serves as vice president of development for the Buccini Pollin Group, the project’s developer.

Howze reiterated a commitment to use Black- and women-owned businesses in doing the work. He also talked about the wide-ranging collaborative effort among Hill District groups and the various companies involved in the project. 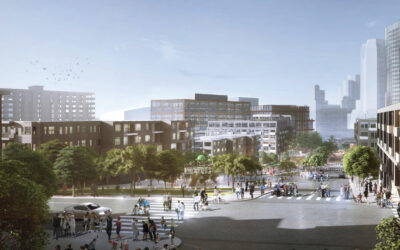