The development team of the Pittsburgh Penguins is working to stay on schedule with building FNB Financial Center on the former Civic Arena site in the Lower Hill.

Kevin Acklin, senior vice president of the Penguins, and Boris Kaplan, vice president of Buccini/Pollin Group, the Penguins’ chosen developer for the arena site redevelopment, updated the board of the Urban Redevelopment Authority of Pittsburgh on progress on the $200 million office tower, which is soldiering on despite a nearly worldwide business shutdown from COVID-19.

“There’s certainly been an important response underway to the COVID-19 virus. We expect that to continue in the public sector and in our private real estate circles,” Kaplan said. “Despite those uncertain conditions, we still expect to bring the project forward in the second half of this year.”

The briefing was part of an additional level of a public process the URA board established with the Penguins at a previous meeting as the team provided notice of its plan to “take down” or buy the property from the URA and the city-county Sports & Exhibition Authority.

The briefing came with no voting measure as the Penguins and BPG expect to seek preliminary approval for the plan to buy the site for the tower from the URA board and the SEA in May. The Penguins are striving to bring the tower before the Pittsburgh Planning Commission in July and hope to begin construction by the end of the year.

With Gensler chosen to design the building, the Penguins and BPG have revised the building plan a bit since they announced that F.N.B. Corp. (NYSE: FNB) would establish its headquarters in the new tower in December.

The Penguins and BPG are working to move forward with the tower plan on parcel G as it also pursues it plan for parcel E that calls for an 800-plus-space parking garage combined with a new indoor-outdoor entertainment facility by Live Nation.

Despite what’s largely been a frozen-in-place real estate market due to the global pandemic, Kaplan said the garage-entertainment complex is generating potential interest from a local, smaller concert promoter with a food and beverage component as a tenant of the plan.

With the statewide shutdown now likely to extend into May and there yet being no indication of the Pittsburgh Planning Commission resuming, Kaplan nonetheless said there’s lots of activity right now.

“The next 90 to 100 days, even with folks working remotely, will be a busy time for the project,” he said.

Acklin emphasized that F.N.B. is the second largest bank in Pennsylvania that is moving its headquarters to the Hill District at a time when the company has also been expanding in southern states.

“This isn’t just moving jobs form the North Side to the Lower Hill,” he said. “This is a substantial commitment by F.N.B. to grow in Pittsburgh. Those jobs could have easily gone south.”

In other matters, the URA board voted: 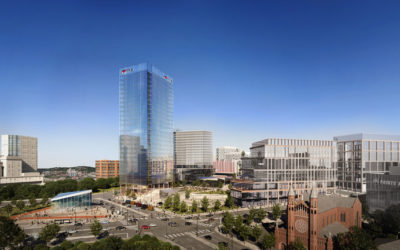