“Picture this: A 15-year-old Tyler Akin — now a high-profile Philly chef and co-founder of the Independent Restaurant Coalition — having afternoon tea with his friends in Wilmington, Delaware, at the Hotel Du Pont’s century-old Green Room. It was “a tongue-in-cheek goodbye” before Akin, a star varsity soccer player, went in for major spinal surgery. For the Wilmington native who’d been visiting the city’s finest dining destination since he was a kid in a tie and blazer for events like his grandma’s birthday, the stately space walked the line between “awe-inspiring” and “stuffy.”

The Green Room is now Le Cavalier, a decidedly unstuffy French brasserie. After living in New York City, D.C., and Philly, Akin never expected to return to his hometown, but with Wilmington on the rise, he and a cadre of chef friends have moved in — bringing with them impressive accolades and national attention.

The burgeoning dining scene didn’t happen organically, but strategically — thanks to one committed real estate developer and a local government that wants to compete with bigger cities to the north and south….” 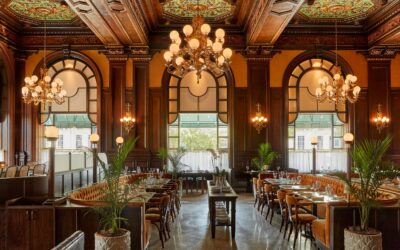