Two years ago Steven Cavalier and Oliver Yeh struck up a conversation on the sidelines of a soccer match at Talen Energy Stadium, home of the Philadelphia Union.

As they watched the sport they love, the two men had to agree there was a systemic problem lurking in the shadows of the American game. Put simply, competitive soccer clubs had created a system that was pay-to-play, which excluded low-income youth who couldn’t afford the thousands of dollars in fees.

On that day in 2016, Cavalier and Yeh planted the seeds of an organization that would open up the sport—sometimes called “the beautiful game”—to everyone in the Wilmington area who wanted to play.

Today, they are close to making their dream a reality.

The Future Soccer Stars (FSS) Foundation is a local nonprofit led by Cavalier, a United States Soccer Federation licensed coach, that works to give Wilmington children free access to the sport. Cavalier wants soccer, and the life lessons associated with it, to change kids’ lives the way it changed his.

“I grew up playing soccer and I saw all the opportunities that it gave me,” says the Fairfax resident. “I wanted to offer the opportunity to everyone, not just the kids that could afford it, or had the means to get somewhere.”

The foundation has its roots in a pilot program run in 2015. Cavalier began hosting soccer lessons and activities at a Boys and Girls club in the city. Then he expanded to two host sites. Then three. This past spring, he had licensed soccer coaches running activities and lessons at six community centers around the city, involving kids ranging in age from 8 to 16. Many of them had never played soccer before they encountered the foundation.

The work FSS does culminates every year in “City on the Pitch Day,” hosted by the University of Delaware at its athletic facilities. In 2016 around 30 kids attended the day of soccer and fun. This past June it blossomed into a celebration involving more than 400 kids from Wilmington, and included activities arranged by the Delaware Art Museum in addition, of course, to playing soccer.

“The kids love it because it’s something completely different,” says Yeh, who lives in Trolley Square and is now the chair of the foundation’s board of directors. “We had kids get on the field and they couldn’t believe it was real grass.”

The dream that Cavalier and Yeh had almost never got off the ground. It was an encounter with one man that made it all financially possible in 2015, when FSS was in the pilot stage.

“Just like anything, it costs money to buy the equipment, get there, start it up and all that,” says Cavalier. “Finally I met a guy by the name of Rob Buccini and he was kind enough, him and the Buccini/Pollin Group, to give me the capital to start it.”

Buccini is on the board of directors for the Foundation and has been a key asset in connecting the organization with the corporate community. His company, BPG, supplied volunteers to help make the City on the Pitch Day a success.

“They like to give back,” says Cavalier, referring to BPG. “They brought 20 to 25 volunteers down for the day to help out.”

Adds Yeh: “Rob has been pivotal in helping us make connections to the community.”

Meanwhile, Cavalier is dreaming bigger than just introducing kids to the sport in after-school lessons.

“We want to create a city league,” he says. “We want to make sure we give everyone the opportunity to play.” 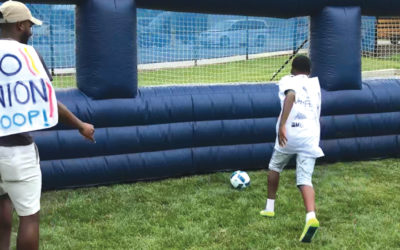