BPG Featured in Delaware Business Times: For BPG, sports has been a path to success

“The Philadelphia Union have risen from humble, fan-fed beginnings to become one of the most successful Major League Soccer franchises in America, and the team’s success is due in part to the vision of Wilmington development leaders Buccini/Pollin Group.

The multi-billion-dollar firm, founded by local brothers Rob and Chris Buccini and Rob’s college roommate Dave Pollin, has put sports near the center of much of its development nationwide, which has increased its visibility and its projects’ success. In Wilmington, BPG built the Chase Fieldhouse that is home to the Delaware Blue Coats and in Pittsburgh, it is working on an enormous mixed-use development that ties into the Pittsburgh Penguins’ PPG Paints Arena.

But in nearby Chester, Pa., just 15 miles north of Wilmington, is BPG’s biggest sports’ success, where it built the Union’s Subaru Park home stadium under the Commodore Barry Bridge. And the firm’s three founders became the founding investors in the professional soccer team along with real estate financier Jay Sugarman, who they had worked with previously…” 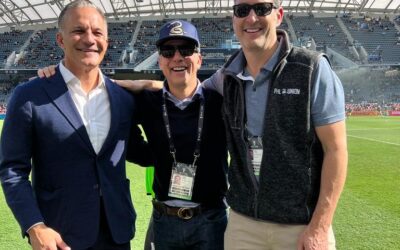