“As commercial real estate continues to work toward becoming a more diverse and equitable industry, The Buccini/Pollin Group is delivering a new model for inclusion and community reinvestment in Pittsburgh’s historic Hill District.

Across the nation, communities are still grappling with the history of redlining, a practice that began in the 1930s when the federal government and mortgage industry used color-coded maps to racially segregate American neighborhoods and schools. Federal highway projects, forced eviction via eminent domain and housing discrimination policies were deployed to displace African Americans from their homes and prevent them from purchasing real estate.

Simultaneously, more than $221B was allocated to white-only suburbs and schools, while African American neighborhoods received “urban renewal” developments that spawned 3,000-plus projects in 200 cities and towns across the U.S.

Pittsburgh’s Lower Hill District and the 12 public housing projects throughout the Greater Hill District were among the nation’s first of those major construction efforts to commence.

While redlining was banned under the Fair Housing Act of 1968, many neighborhoods still feel the impact of the practice today and have lost out on investment opportunities as a result. In Pittsburgh, the Lower Hill Development Team is reinvesting in one such neighborhood, the Hill District, and creating a development that celebrates and invigorates the local community.

“This is a transformational project with heavy social impact and reinvestment in neighborhoods that have been disinvested in deliberately, based on these redline guidelines,” The Buccini/Pollin Group Vice President of Development Bomani Howze said.

The Lower Hill Redevelopment is a $1B, 28-acre mixed-use project that will feature a diverse mix of office, retail and multifamily development, entertainment venues, restaurants, pedestrian corridors and vibrant open spaces.

In September 2021, the First National Bank Corp., the Pittsburgh Penguins, Clay Cove Capital and the Buccini/Pollin Group joined members of the Historic Hill District community to break ground on the FNB Financial Center, a 26-story mixed-use tower that will bring 475K SF of Class-A office space to the area, in addition to inviting plazas for community events and retail kiosks in support of small, local businesses.

Bisnow sat down with Howze and Chris Buccini, co-president of the Buccini/Pollin Group, to learn more about the project and what it means to the company and to the region.”

Continue Reading the interview on BISNOW 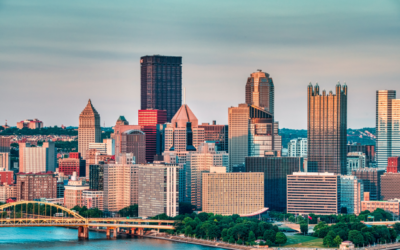