The anchor development will debut in late 2018, bringing new culinary talent to downtown Wilmington, and is currently seeking tenants for eight sought-after kitchens

DE.CO, Wilmington’s new 12,000 square-foot will be a community anchor for the city’s ongoing revitalization and bring eight innovative kitchens and a central bar to downtown Wilmington. DE.CO will offer guests a thoughtful selection of cuisines from the mid-Atlantic and around the world, while serving as the first chef-driven food hall in the state of Delaware. Located at 10th and Orange Streets, within the historic Dupont Building, home to the HOTEL DUPONT, DE.CO is a $3.5 million collaboration between developers The Buccini/Pollin Group and Seawall Development, and is slated to open in late 2018.

DE.CO will be an anchor for a rejuvenated ground floor including retail shops and artisan boutiques and serve as a critical component of the $150 million redevelopment of the historic Dupont Building. Built in 1908, the Dupont Building was the first high-rise in Wilmington and stands as a towering tribute to the city’s ingenuity. With DE.CO, the Buccini/Pollin Group and Seawall Development brings a forward-thinking eye to the future and enters Wilmington into the national conversation by joining a trend of large-scale food halls.

“With DE.CO, we’re debuting a new community in the heart of Wilmington: a collective that will offer guests unparalleled selection and diversity, all in one comfortable, central location.,” says Buccini/Pollin’s Chris Buccini. “Wilmington is a thriving, energetic metropolis and this community-driven food hall will be the heartbeat of a young, vibrant city.”

DE.CO (an abbreviated version of “Delaware Collective”) is a place for creative chefs to launch new and exciting restaurant ideas, and is currently accepting applications from chefs, whether for their first “storefront” or as a means of developing a new concept. Interested parties should reach out to Peter DiPrinzio at peter@seawalldevelopment.com.

Each of the eight chefs will operate from one of the kitchens within the food hall, and guests will be able to visit each kitchen and order from there directly. Diners can visit each stall as a group or order from different stalls, then enjoy their food together at one of many comfortable tables throughout the space or at the expansive atrium bar, serving cocktails, wine and beer.

“Wilmington’s newly thriving food scene is reaching a turning point, and DE.CO’s convenient location at the heart of the dynamic mid-Atlantic makes it a magnet for culinary talent that will draw locals and visitors alike downtown,” says Seawall’s Peter DiPrinzio, who developed Baltimore’s wildly successful food hall, R. House. “DE.CO will feel like a lively restaurant and bar, and will serve as a gathering place throughout the day in into the night: for coffee with friends, a lunch meeting among co-workers, date night for couples or weekend brunch with the whole family.”

DE.CO is slated to debut in late 2018, and will serve seven days a week, including weekend brunches and evenings at the atrium bar. The modern-deco design will evoke the hotel’s grand past and transition it into a contemporary aesthetic, both throughout the comfortable-yet-spacious food hall and in a second-level private event space overlooking the main bar. Guests are encouraged to stop by for lunch during the work week, using the space for meetings and gatherings alike, and can also take their food to go, making DE.CO a hub for office workers, families and visitors. Additional details, including all eight chef tenants and their menus, will be announced as the project nears completion.

“We hope that visitors and locals alike will think of DE.CO as a ‘third space’ – not their home; not their office; but a fun place to dine, drink and mingle comfortably,” says Buccini. “The communal feel of hosting eight different chefs will extend to all aspects of DE.CO, making it a gathering place for all in the heart of downtown Wilmington and extending the city’s ongoing renaissance with a bright new anchor in a beautiful, historic building.” 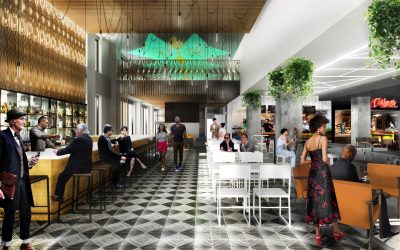