The expansive Constitution Yards Beer Garden on Wilmington’s Riverfront is about to have some company.

A new $3.3 million downtown Wilmington beer garden called Makers Alley will open by the end of the month, stretching across the length of a city block between Orange and Shipley streets, says Rich Snyder, director of food and beverage for The Buccini/Pollin Group. It stands next to the year-old Residences at Mid-Town Park complex.

The eatery/bar is a first for Wilmington’s largest developer, which not only created Makers Alley but will also operate the space without a restaurant partner.

“We’ve dipped our toes in the hospitality waters for quite some time, but this is the first time we’ve done a BPG place top to bottom,” Snyder says.

Makers Alley, located at 804 Orange St., has two distinct areas starting with the indoor bar, which takes over a renovated former carpentry workshop from the late 1800s.

The space has 30-foot ceilings with Edison-style filament light bulbs that dangle at the end of neon cords above the bar, which fills the small room. There are exposed beams overhead with nails still sticking out, keeping some of its 19th-century flair. The indoor area of Makers Alley in Wilmington can hold about 35 people. An outdoor beer garden-style patio can hold more and will offer heat lamps, a fire pit and blankets during fall and winter. The industrial “American cool” vibe at Makers Alley even includes its beer taps. Both domestic and craft beers will be served. 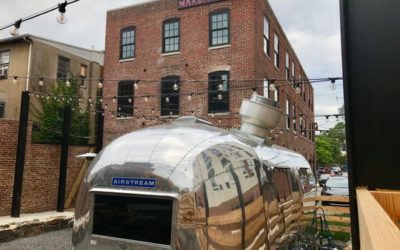