The Atlantic 10 Conference announced Tuesday, October 26th, its Women’s Basketball Championship will be played at CHASE Fieldhouse in Wilmington, Del., beginning in March of 2022. The multi-year agreement with BPG | SPORTS moves the 14-team championship back to a neutral site.

The home of the NBA G League Delaware Blue Coats, CHASE Fieldhouse is a 2,500-seat arena and sports complex that opened in January of 2019. Located south of downtown Wilmington, the complex also includes indoor and outdoor multi-purpose turf fields and is less than a mile from hotels, restaurants and riverfront entertainment.

“CHASE Fieldhouse provides the A-10 a tremendous opportunity to return our Women’s Basketball Championship to a neutral site after a challenging 2021 COVID year. It is a state-of-the-art arena perfectly located geographically for our women’s championship,” stated Atlantic 10 Commissioner Bernadette V. McGlade. “Partnering with BPG | SPORTS, the city of Wilmington, the 76ers, and the NBA G League is a win-win for all.”

The Atlantic 10 Championship format includes all 14 teams playing at the host site. The 2022 championship will open with the first round on Wednesday, March 2, followed by four second-round games on Thursday, March 3. The four quarterfinal games will tip-off Friday, March 4, followed by the semifinal round on Saturday, March 5, which will be televised live nationally on CBS Sports Network. The finals will air live on ESPNU on Sunday, March 6.

When the championship tips off in Wilmington in 2022, it will mark eighth time in the 40-year history of the postseason tournament that it will take place at a neutral site. The Richmond Coliseum in Richmond, Va., was the most recent neutral site host, showcasing the championship for five years from 2014 through 2018. Prior to that, Tsongas Center in Lowell, Mass., played host in 2011, while Showplace Arena in Upper Marlboro, Md., served as host in 2010. The Atlantic 10 is one of only nine conferences (out of 32 leagues) where the women’s basketball championship will be played at a neutral site separate from the men’s championship.

“We are honored and beyond excited that The Atlantic 10 Conference has chosen Wilmington and The CHASE Fieldhouse as home for the 2022 Atlantic 10 Women’s Basketball Championship” said BPG | SPORTS President Rob Buccini. “Our entire community is anxious to welcome NCAA Division I Basketball to Wilmington.”

The Atlantic 10 has sent 11 different teams to postseason play over the last five completed seasons. The league has also earned eight NCAA Tournament bids, including three at-large selections, and 19 WNIT bids during that timeframe.

CHASE Fieldhouse resides in the heart of Wilmington, which boasts a metro population of over 700,000 people, and the nearby Delaware Valley, which includes Philadelphia and has a population over 7 million.

For the last three seasons, the A-10 Women’s Basketball Championship has been held at member institutions’ campus arenas. Duquesne University in Pittsburgh hosted the 2019 championship at the A.J. Palumbo Center (now UPMC Cooper Fieldhouse) and the University of Dayton hosted the 2020 championship at UD Arena. Last year, the championship returned to the city of Richmond, Va., when VCU served as host at the Stuart C. Siegel Center.

WHAT THEY ARE SAYING 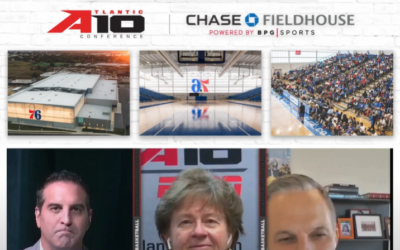